Our current campus standard for SPSS and AMOS is version 21.  If you have older versions installed, please uninstall them.  If you need to have version 21 installed, contact your local CLAS IT support person. SPSS is available for both Windows and Mac platforms.  It is also available for faculty and staff through Citrix.  Check out what’s new in version 21.

Off-network machines, such as those used for secure research, can also have SPSS and AMOS installed.  The licenses for SPSS and AMOS on these machines are not automatically updated and must be renewed each year in August.  Contact Aaron Forsyth for more information about this.

Nvivo has released a couple of new service packs in the last few months.  The latest, Nvivo 10, Service Pack 4 was released in October 2013. These service packs include new features such as ‘Auto-coding’, the ability to import PNG files, SurveyMonkey and Mendeley Support, as well as other bug-fixes.  To see the complete list of changes and download the update, visit Nvivo’s website.

A user I was working with was unable to open her Nvivo file.  This was an Nvivo 9 file that had been converted to Nvivo 10: more about Nvivo version compatibility here.  When clicking on the file she received the message ‘The project <file path>\<project name> could not be opened, due to an unexpected error’.  Nvivo’s support pages recommend upgrading to the most recent version first.  We upgraded to the latest service pack, which fixed the problem; she was able to open the file again.

Does your department use a networked Toshiba printer with access codes?

If you are on a Windows PC, you should see this pop-up after printing your job.  Enter the code provided by your department and your job should print successfully.

On a Mac, there is no pop-up for the department code when you click print; it appears that the job is sent, yet nothing comes out of the printer.  This often happens when you have not set the department code in the printing preferences.  To do so, you must click to see all of the printing options and choose ‘Print Mode’ from the drop down list.  From there, you can check the ‘Department Code’ box and enter your department code.  Note that you only have to do this once if you continue to use ‘Last Used Settings’ (the default) for future print jobs. 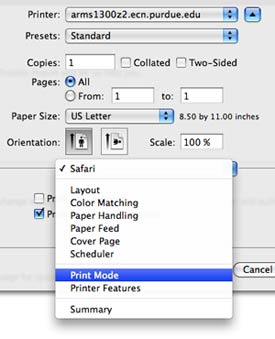 Printing still not working as it should?  Contact your local CLAS IT support person.