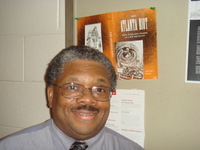 Show Thyself A Man: Georgia State Troops, Colored, 1865-1905 is my second book. It has just been published by the University Press of Florida. The book marks an extended time researching questions focused on African American freedom during the late nineteenth century. The nineteenth century militia company was more than a military unit. It was critical to community organizing, public displays of freedom, and in some places a defense force. Georgia had two types of militia companies: independent and state sponsored. For more on this see https://floridabookshelf.wordpress.com/2016/07/25/show-thyself-a-man/

September 15, 2016 at 3:30pm: The Second Annual J. Murrey Atkins Library Faculty Engagement Award will be awarded to Dr. Gregory Mixon for “collaborative work with library faculty and staff to produce creative opportunities for students to feel connected to History through the exploration of library materials.” The award is “presented to a UNC Charlotte faculty member who has engaged in innovative or exceptional work with library collections, programs, and services” as well as “recognition of outstanding faculty contributions to the library’s mission, vision, and strategic initiatives.” I must say thank you to Atkins Library faculty and staff because this award is the result of close cooperation with librarians in providing students with access to primary sources, the tools of the historian. The library–public and collegiate–has been a place that opened up a universe for me. My thanks to all the librarians who have made me welcome in their facilities.

I am currently working on a new book project focused upon Black militias in the Carolinas(North Carolina and South Carolina), 1865-1899 and an article about turn of the century Atlanta, Georgia.