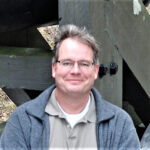 I joined UNC Charlotte in 2000 after completing my MS and PhD in Geology at the University of Delaware.  For my first decade in North Carolina my research centered on using fossils to solve environmental problems.  The published results of this research included journal articles and book chapters concerning paleotempestology (the study of ancient storms), bioturbation (the mixing of sediments by critters), military geoarchaeology (of the barrier islands surrounding Charleston, SC) and Earth Sciences pedagogy.

In 2004 I joined the research team in Charleston studying the most fascinating Civil War artifact I have ever seen:  The Confederate submarine H.L. Hunley.  My research pertaining to the submarine involves using microfossils to interpret the sediment infilling history of the vessel and provide insights into the reasons for the exceptional preservation of the crew.

This interest in the relationship between geology and the American Civil War is reflected in my current research agenda and publications.  In addition to several recent journal articles on the geology of Civil War battlefields and landscapes, I have also completed my first two books. The first, Rocks and Rifles:  The Influence of Geology on the Combat and Tactics of the American Civil War, is intended for audiences interested in either American history or geology (or, hopefully, both) and was published by Springer-Nature in 2019.  The newest publication, Myths of the Civil War:  The Fact, Fiction, and Science behind the Civil War’s Most-Told Stories, uses mathematics and physics to shatter many of the most cherished and oft-repeated stories from the American Civil War.  A third book, about sedimentary geology and the fighting of the Civil War, will hopefully be published by the University of Georgia Press; the manuscript is currently in peer-review.