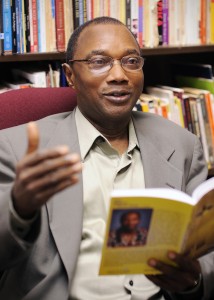 our own faces. The groaning earth can still recover whole

from threatening wounds. Don’t let her die if we must live!

(“After the Head Count”)

Tanure Ojaide has been the Frank Porter Graham Professor of Africana Studies since 2006. His twenty poetry collections include The Fate of Vultures (1990), The Blood of Peace (1991), The Tale of the Harmattan (2007), Waiting for the Hatching of a Cockerel (2008), The Beauty I Have Seen (2010), Songs of Myself: Quartet (2015), and The Questioner: New Poems (2018). His other writings are: three memoirs, Great Boys: An African Childhood (1998) Drawing the Map of Heaven: An African Writer in America (2012), and At Home, Away From Home (2018); three collections of short stories including God’s Medicine Men & Other Stories (2004) and God’s Naked Children: Selected and New Stories (2018); four novels, Sovereign Body (2004), The Activist (2006) and Matters of the Moment (2011); and nine scholarly books, including Poetic Imagination in Black Africa (1996), Poetry, Performance, and Art: Udje Dance Songs of the Urhobo People (2003), Contemporary African Literature: New Approaches (2012), and Culture and Literature in Global Africa (2018). His poems have been highly anthologized in dozens of major anthologies, including The Poetry of Men’s Lives: An International Anthology (2004), Emergency Kit: Poems for Strange Times (1996), Border Lines: Contemporary Poems in English (1995), and A World Assembly of Poets: Contemporary Poems (2017).

Born in the oil-rich but economically impoverished Niger Delta area of Nigeria, Ojaide was raised by his grandmother in a riverine rural environment. He attended a Catholic Grammar School and Federal Government College, Warri. Ojaide was educated at the University of Ibadan, where he received a bachelor’s degree in English, and Syracuse University, where he received both the M.A. in Creative Writing and Ph.D. in English. A Fellow in Writing of the University of Iowa, his poetry awards include the Commonwealth Poetry Prize for the Africa Region (1987), the All-Africa Okigbo Prize for Poetry (1988, 1997), the BBC Arts and Africa Poetry Award (1988), and the Association of Nigerian Authors Poetry Award (1988, 1994, 2003, and 2011). Sovereign Body was a runner-up for The Commonwealth Literature Prize for the Africa Region in 2005. His non-fiction, Drawing the Map of Heaven: An African Writer’s Experience of America, was a runner-up for the Penguin Prize for African Writing (2010). Ojaide taught for many years at The University of Maiduguri (Nigeria) and is currently the Frank Porter Graham Professor of Africana Studies at The University of North Carolina at Charlotte. He received a National Endowment for the Humanities fellowship (1999/2000) to collect and study the “Udje Dance Songs of Nigeria’s Urhobo People.” He has twice received the Fulbright fellowship (2002/03 and 2013/14), and the Carnegie African Diaspora Fellowship (2016). He has read from his poetry in Britain, Harbourfront (Canada), International Poetry Festival, Medellin (Colombia, 2013), France, Pan-African Poetry Festival, Accra (Ghana, 2008), Israel, Malaysia, Mexico, Nigeria, Spain, World Poetry Festival, Rotterdam (The Netherlands, 1992), the United States, Poetry Africa (South Africa, 2005), and Sahitya Akademi World Poetry Festival, New Delhi (March 21-24, 2014). Three international conferences have been held at Delta State University, Abraka, Nigeria, in July 2005 and July 2008 and the University of Port Harcourt (May 2-5, 2018) to discuss Ojaide’s writings. Ojaide was the 2005 recipient of the University of North Carolina at Charlotte’s First Citizens Bank Scholar Award for his creative writing and scholarship and the 2016 ALA Folon-Nichols Award for African Writer of Excellence. In 2016 he was awarded the Nigerian National Order of Merit for the Humanities. He was co-winner of the Wole Soyinka Prize for Literature in Africa. His poetry has been translated into Chinese, Dutch, French, German, Spanish, Sanskrit, and Hindi.

The Creative Impulse on the Homeland, the Nation, and the Global: My Testimony. Monograph. Lagos: Malthouse Press, Lagos, 2018.