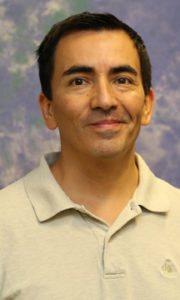 Dr. Bahamón was born in Bogotá, Colombia. He earned his Bachelor of Science from the Computer Science program at Texas A&M University – Kingsville and a Master of Science in Computer and Information Sciences from Florida State University. Before returning to graduate school, he worked in the IT industry for several years, in multiple capacities. He attended North Carolina State University, where he obtained his Ph.D. at the Department of Computer Science, where he worked in Serious Games and Artificial Intelligence. When he is not teaching, doing research, or writing code, Dr. Bahamón spends his time with his family, reading, watching Netflix, or practicing the sport of Triathlon.

Bahamón, Julio C. and Young, R. Michael. Toward a Computational Model for the Automatic Generation of Character Personality in Interactive Narrative. In Proceedings of the 12th International Conference on Intelligent Virtual Agents, 520-522. Santa Cruz, California, 2012.

Bahamón, Julio C. and Young, R. Michael. CB-POCL: A Choice-Based Algorithm for Character Personality in Planning-based Narrative Generation. In Proceedings of the 2013 Workshop on Computational Models of Narrative (a satellite workshop of the 35th Annual Meeting of the Cognitive Science Society, COGSCI 2013) (CMN’13), 4-23. Hamburg, Germany, 2013.

Bahamón, Julio C. and Young, R. Michael. A Choice-Based Model of Character Personality in Narrative. In Proceedings of the 2012 Workshop on Computational Models of Narrative (co-located at the Eighth International Conference on Language Resources and Evaluation, LREC 2012) (CMN ‘12), 164-168. Istanbul, Turkey, 2012.