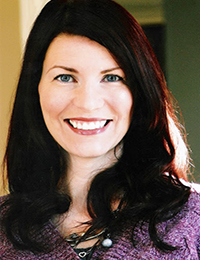 Aly Amide is an Assistant Professor of Costume Design in the Department of Theatre. She has worked as a designer and playwright based in Chicago for the last 18 years. She is an ensemble member of Chicago’s Strawdog Theatre Company and Lifeline Theatre. She started Cartage Theatre, based in Charlotte, with her husband in 2017. She is a founding member and also served as the artistic director for the horror theatre company WildClaw. Her costume and makeup designs have been seen at Michigan Shakespeare Festival, Magic Theatre of San Antonio, Irish Theater of Chicago, Buffalo Theater Ensemble, Dupage Opera, Stage Left, Artistic Home, House Theater of Chicago, Piven Workshop, Pittsburgh Irish and Classical Theatre, and Vitalist Theater. Previously, she worked for 15 years as the costume and makeup coordinator for the College of DuPage theater and dance department.

Her creative research focus concerns the role of the ‘designer as dramaturg’. She practices this research by designing new works and re­-envisioned classics through the concept of ‘world­-building’. Recent design projects include “For Services Rendered” for Griffin Theatre in Chicago, and she was a co-writer for “Masque Macabre” at Chicago’s Strawdog Theatre Company.

Aly received her BA in Theatre from Knox College, an MFA in Costume Design from Carnegie Mellon, and a Certificate in Fashion Design from the College of Dupage.

Read more on her faculty profile at coaa.uncc.edu >>