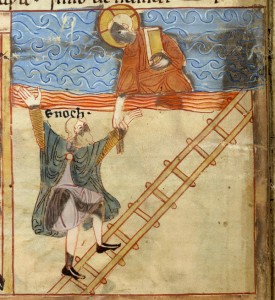 ‘… a wise person should not read from any book until they know the name of its author.’ Shem Ṭov Ibn Gaon, Baddey ha-’Aron

‘The production and circulation of spurious texts is a cultural strategy used in the interests of various political agendas ….’ K. K. Ruthven, Faking Literature, p. 184.

This course concentrates on Jewish apocrypha and pseudepigrapha, a vast penumbra of allegedly ‘expunged’ or ‘falsely ascribed’ literary texts darkening the margins around the ‘official’ scriptural canon.  The works we will study are customarily labeled ‘Jewish’ and dated within the Second Temple or Roman eras of Jewish history.  A number of them are assumed to have some utility for assessing intellectual trends in early Judaism, Christianity, and Islam.  We will subject all these assumptions to a rigorous scrutiny.  Some critical categories and taxonomies demanding consideration include those of the authentic, the genuine, and the original versus the spurious, the fake, and the counterfeit; ancient versus modern notions of authorship; cultural parameters surrounding the social construction of authority; and textual signatures (if any) of religious identity.  Much time will be devoted to the close reading in English of a broadly representative sampling of this literature (e.g., 1 Enoch, Jubilees, Life of Adam and Eve, Testaments of the Twelve Patriarchs, 4 Ezra, 2 Baruch, etc.) wherein issues pertinent to reconstructions of Jewish (Christian, etc.) literary and religious history can be identified and evaluated.

a. Research project. One (1) formal research project to be presented in oral and written form (at least 15 double-spaced pages, exclusive of notes and list of sources) that focuses upon a particular topic relevant to the study of Jewish apocrypha and pseudepigrapha. In consultation with the instructor, the student should select a topic of individual interest that permits such an extended exposition, analysis and/or evaluation. The project will be expounded orally at the final class meeting (Friday, April 29); the written papers are due by 12:00 PM on Monday, May 9. The research project accounts for 50% of the course grade.

b. Individual involvement. Almost perfect attendance (see below) is an essential requirement for this course. Each class meeting builds upon the knowledge gained during previous meetings. Moreover, in-class discussion, close reading, and analysis by both the instructor and class members comprise the bulk of every class meeting. Preparation for every class usually involves the completion of a series of assigned readings and/or written assignment(s), and individual students may be asked to initiate our collective examination and discussion of the weekly topics. Students are expected to contribute in an informed manner to the public analysis and discussion of any assigned topic. The instructor’s collective assessment of one’s attendance, general class preparation, written assignments, and oral contributions will constitute 50% of the final course grade.

c. Zakhor (Remember!): Mastery of the assigned readings, completion of written assignments, and diligent class attendance are necessary prerequisites for the successful completion of this course. Each student is responsible for all lectures, class discussions, hand-outs, assignments, and announcements, whether or not he/she is present when they occur.

Graduate students are graded using a scale of A, B, C, and U. A grade of ‘C’ for a graduate student is equivalent to that of a ‘D’ for undergraduates; ‘U’ signals unacceptable graduate-level work.

b. One of the requirements of this course is to complete the work of the course on time. Sometimes there are legitimate reasons for late work—an illness or other emergency. ‘Emergency,’ however, does not include your social involvements, travel plans, job schedule, disk and/or printer failures, the state of your love life, your obligations to other courses, or general malaise over the state of the world. The world has been in a mess as long as anyone can remember, and most of the world’s work is done by people whose lives are a mass of futility and discontent. If you haven’t learned yet, you had better learn now to work under the conditions of the world as it is. Therefore:

1) All missing work is averaged as a 0 in the computation of the course grade.

2) All written work is due on the dates scheduled in the syllabus, or on the date announced by the instructor in class (usually the next class meeting). ‘Late’ work will not be accepted from students who were privy to its oral evaluation and discussion (i.e., you were present while we ‘went over it’ but you neglected to do it beforehand). In the event of one’s absence, ‘late’ submissions bear the following penalties: one day late/one letter grade; two days late/two letter grades; three or more days late/U. Please note: these ‘days’ are calendar days, not class meeting days. For accounting purposes, letter grades bear the following values: A=95; A-=92; B+=88; B=85; B-=82; C+=78; C=75; C-=72; D=65; F/U=35. Translate √+ = A; √ = B-; √- = D for undergraduates; C for graduate students. An untyped written assignment, seminar paper, or final project automatically receives the grade U, as do those typed submissions which violate the required parameters or which the instructor deems physically unacceptable and/or grammatically incomprehensible.

3) Since your diligent physical participation is critical for the success of this course, attendance at class meetings will be monitored by the instructor. One or two absences, while regrettable, are unexceptional; three (3) is the limit of tolerability. Each successive absence lowers the Individual Involvement component of your assessment by one letter grade; seven (7) or more earns an automatic F in that component of your final grade. Please note that the instructor does not distinguish ‘excused’ from ‘unexcused’ absences. Unsanctioned late arrivals and early departures will be tallied as absences.

c. Assistance and solicitation of criticism is your right as a member of the class. It is not a privilege to be granted or withheld. Do not hesitate to request it nor wait too late in the course for it to be of help.

A. Some Critical Studies

Regina Bendix, In Search of Authenticity: The Formation of Folklore Studies (Madison: University of Wisconsin Press, 1997).

Roger Chartier, “Figures of the Author,” in his The Order of Books: Readers, Authors, and Libraries in Europe between the Fourteenth and Eighteenth Centuries (trans. Lydia G. Cochrane; Stanford: Stanford University Press, 1994), 25-59.

B. On Manuscripts, Scribes, and the Transmission of Texts by Jews, Christians, & Muslims in Late Antiquity & the Middle Ages

N.B. Although some of these ‘logistical’ studies focus on later periods and differing genres of literature, they are extremely useful for framing some salient issues that are of direct relevance to the manufacture, preservation, and inter-religious transmission of our parascriptural materials.

Leila Avrin, “The Hebrew Book,” in her Scribes, Script and Books: The Book Arts from Antiquity to the Renaissance (Chicago/London: American Library Association/The British Library, 1991), 101-37.

Malachi Beit-Arié, Hebrew Manuscripts of East and West: Towards a Comparative Codicology (The Panizzi Lectures 1992; London: The British Library, 1993).

______, “Transmission of Texts by Scribes and Copyists: Unconscious and Critical Interferences,” Bulletin of the John Rylands University Library of Manchester 75 (1993): 33-51.

Paul Mandel, “Between Byzantium and Islam: The Transmission of a Jewish Book in the Byzantine and Early Islamic Periods,” in Elman and Gershoni, Transmitting Jewish Traditions, 74-106.

Franz Rosenthal, “Of Making Many Books There Is No End: The Classical Muslim View,” in George N. Atiyeh, ed., The Book in the Islamic World: The Written Word and Communication in the Middle East (Albany: State University of New York Press, 1995), 33-55.

C. Some Important Collections of Biblical Apocrypha and Pseudepigrapha

Susan Docherty, The Jewish Pseudepigrapha: An Introduction to the Literature of the Second Temple Period (Minneapolis: Fortress Press, 2015).

M. R. James, The Lost Apocrypha of the Old Testament, Their Titles and Fragments (London: Society for Promoting Christian Knowledge, 1920). Note especially the important collection of materials amassed by Bob Kraft and his associates here.

David Frankfurter, “Beyond ‘Jewish Christianity’: Continuing Religious Sub-Cultures of the Second and Third Centuries and Their Documents,” in Becker and Reed, The Ways that Never Parted, 131-43.

______, Pseudepigrapha of the Old Testament as Part of Christian Literature: The Case of the Testaments of the Twelve Patriarchs and the Greek Life of Adam and Eve (SVTP 18; Leiden: Brill, 2003).

Michael A. Knibb, “Christian Adoption and Transmission of Jewish Pseudepigrapha: The Case of 1 Enoch,” Journal for the Study of Judaism in the Persian, Hellenistic and Roman Period 32 (2001): 396-415.

Robert A. Kraft, “The Codex and Canon Consciousness,” in McDonald-Sanders, The Canon Debate, 229-33.

______, “The Weighing of the Parts: Pivots and Pitfalls in the Study of Early Judaisms and their Early Christian Offspring,” in Becker and Reed, The Ways that Never Parted, 87-94.

David Lambert, “How the ‘Torah of Moses’ Became Revelation: An Early, Apocalyptic Theory of Pentateuchal Origins,” Journal for the Study of Judaism in the Persian, Hellenistic and Roman Period 46 (2015): 1-33.

David G. Meade, Pseudonymity and Canon: An Investigation into the Relationship of Authorship and Authority in Jewish and Earliest Christian Tradition (WUNT 39; Tübingen: J. C. B. Mohr, 1986), 1-16.

Hindy Najman, “The Vitality of Scripture Within and Beyond the ‘Canon’,” Journal for the Study of Judaism in the Persian, Hellenistic and Roman Period 43 (2012): 497-518.

Rivka Nir, “The Aromatic Fragrances of Paradise in the Greek Life of Adam and Eve and the Christian Origin of the Composition,” Novum Testamentum 46 (2004): 20-45. [see Smit below]

______, The Destruction of Jerusalem and the Idea of Redemption in the Syriac Apocalypse of Baruch (SBLEJL 20; Leiden/Atlanta: Brill/Society of Biblical Literature, 2003).

______, “Exploring the Afterlife of Jewish Pseudepigrapha in Medieval Near Eastern Religious Traditions: Some Initial Soundings,” Journal for the Study of Judaism in the Persian, Hellenistic and Roman Period 30 (1999): 148-77.

______, “Some Explorations of the Intertwining of Bible and Qur’ān,” in John C. Reeves, ed., Bible and Qur’ān: Essays in Scriptural Intertextuality (SBLSymS 24; Leiden/Atlanta: Brill/Society of Biblical Literature, 2003), 43-60.

______, ed., Tracing the Threads: Studies in the Vitality of Jewish Pseudepigrapha (SBLEJL 6; Atlanta: Scholars Press, 1994). A collection of solicited essays addressing pseudepigraphic ‘survivals’ in Jewish, Christian, Muslim, and other Near Eastern religious and literary texts.

Peter-Ben Smit, “Incense Revisited: Reviewing the Evidence for Incense as a Clue to the Christian Provenance of the Greek Life of Adam and Eve,” Novum Testamentum 46 (2004): 369-75.

______, Selected Studies in Pseudepigrapha and Apocrypha with Special Reference to the Armenian Tradition (SVTP 9; Leiden: Brill, 1991). Reprints a plethora of groundbreaking articles.

Johannes Tromp, “The Story of Our Lives: The qz-Text of the Life of Adam and Eve, the Apostle Paul, and the Jewish-Christian Oral Tradition Concerning Adam and Eve,” New Testament Studies 50 (2004): 205-23.