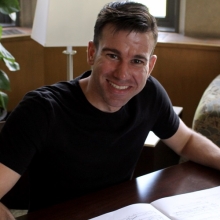 Hunter Kopczynski (he/him) serves as Director of Bands and Assistant Professor of music at the University of North Carolina at Charlotte, where he conducts the UNC Charlotte Wind Ensemble and teaches courses in conducting and music education.

Dr. Kopczynski comes to Charlotte after holding similar positions at Mars Hill University and in the public schools of Virginia. At MHU, he coordinated the band program, conducted the wind symphony, and taught courses in the Department of Music. Additionally, he served as conductor of the Asheville Symphony Youth Orchestra. Before his time in Asheville, Dr. Kopczynski completed his graduate degrees at Michigan State University, where he held instructional and musical responsibilities with each of the concert and athletic bands and served the Graduate School as a Leadership Fellow. Prior to graduate study, he taught middle and high school music in Virginia. There he successfully led high school and middle school bands in the Roanoke County Schools and most recently for six years in the Williamsburg-James City County Schools.

He is an advocate for the expansion, development, and diversification of the wind repertoire and a supporter of music education in the schools. In his research and teaching, Dr. Kopczynski is especially interested in the intersection of experience and curriculum to influence ensemble culture. He is an active adjudicator, clinician, and guest conductor, and has presented at state and regional music education conferences. His professional affiliations include the College Band Directors National Association and the National Association for Music Education.