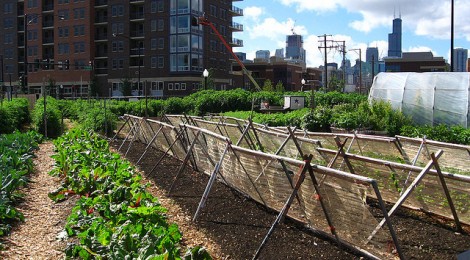 Last night, I was asked to participate in a Keeping Watch panel discussion on urban agriculture in Charlotte along with Henry Owen, who talked about his work with the many aspects of Friendship Gardens, and Kris Steele, who spoke on the difficulties and exhilarations of starting a composting effort in his neighborhood, among other projects.

Mary Newsom from UNCC’s Urban Institute and PlanCharlotte.org invited me to speak on behavior change and urban food systems, given my background with the Center for Research on Environmental Decisions and my current research on the Charlotte area food systems. The panel discussion was just before a screening of Growing Cities, a documentary about urban farming experiences across the US:

In their search for answers, filmmakers Dan Susman and Andrew Monbouquette take a road trip and meet the men and women who are challenging the way this country grows and distributes its food, one vacant city lot, rooftop garden, and backyard chicken coop at a time. Join them as they discover that good food isn’t the only crop these urban visionaries are harvesting. They’re producing stronger and more vibrant communities, too. The film was a nice look at the many different faces of urban agriculture. The stories of the farms in San Francisco, Milwaukee, Detroit, New Orleans, Boston, New York, and Atlanta were often riveting and uplifting, poignant and educational. I loved seeing the different forms of urban agriculture, from vacant lots to green roofs to the flatbed of a pickup truck, and learned something from each of them.

My own perspective, drawing on ideas from anthropology, psychology, and environmental justice, emphasized the role of culture in urban agriculture. From being aware of the kinds of activities and benefits, to developing the kinds of habits that make gardening and fresh food a habit, individuals can change their behaviors around food.

As you may know, not everyone shares your enthusiasm or knowledge. How many of your neighbors would welcome your new flock of chickens? How many would love seeing tomatoes in your front yard? You can help them understand – host an information session for your neighborhood or friends – I organized one on beekeeping and chickens in my neighborhood. There is not much of a culture of agriculture in Charlotte – it takes work to change this. People can also encourage change in others by finding their potential motives for appreciating or getting involved in urban agriculture. Some of us are motivated by environmental benefits of organic food or being in nature, while others see the economic or health benefits, or enjoy working with others from their communities. The film discussed the WWI and WWII Victory Gardens and the role of patriotism in motivating gardening, and I also mentioned the growing interest of churches in seeing environmental efforts as stewardship. Learning to talk about environment or sustainability with others requires understanding how to frame these issues in different ways.

We should keep learning from each other about food cultures and food systems; understanding someone else’s perspective requires listening and empathy, but can create the conditions for a better world. A colleague of mine asked her students to take the SNAP challenge. While only a short amount of time, you can start to see the challenges of living entirely on food stamps (though critics of the SNAP challenge point out that many people on SNAP use it to supplement other food spending).

One gardener in the film, Malik Yakini from the Detroit Black Community Food Security Network, made an excellent point about learning from other people. Roughly, he argued that middle-class volunteers need to remember that the people they are trying to help also have knowledge and skills, and to avoid being paternalistic. Another gardener, Will Allen of Growing Power in Milwaukee reminded us that farmers built this country, and used to be a prestigious job; it could be again. Humans are clearly very motivated by social relationships. One researcher, Robert Cialini, has found that changing the language of towel reuse signs in hotels encourages higher rates of reuse – just by saying that a majority of other guests at the hotel had reused their towels. Poonam Arora and I also headed up a study at Columbia that suggests that just by telling people they were in a named group increased their rate of cooperation in a laboratory study.

Behavior change is not easy, in part because some behaviors are affected by many kinds of policies.  We are not enough. Food policy is more than working in a garden every week or owning some chickens. If we want to talk about fighting hunger, we need to do more. We need to change other behaviors. Support the food system with policies that support it – everything from homeowner policies on front yard gardens, to supporting a local food hub to bringing gardens into schools. We need to understand food systems as more than just food and farming, but linked intimately with education, spirituality, governance, health, justice, employment, waste, community-building, and many other areas of life. This will require more than just buying more at the farmers market. It will require real system change, and more social in our sustainability efforts.

As they said in the film, grow where you are.

For more information on communicating about environmental issues, see the CRED Communications Guide (for climate change, but applicable to many areas).