Celebrating Shakespeare — No one knows for certain the exact date of William Shakespeare’s birth, but parish records indicate that he was baptized on April 26, 1564. Many historians and biographers believe that he was likely born on April 23. By coincidence, he died on April 23, 1616. Thus, next year will mark the 400th anniversary of his death. In commemorating these important dates, we celebrate not only Shakespeare’s legacy, but we also celebrate the Shakespeare’s unparalleled contribution to literature, theater, and the humanities in general.

The study of Shakespeare’s plays has a long and rich history in our English Department. In the early days of the University, Roy Moose helped build the foundation for Shakespeare studies in the department. In recognition of his excellent teaching, he received the North Carolina National Bank Teaching Award (the forerunner to the Bank of America Teaching Award) in 1969. In subsequent years, a number of other English professors have taught Shakespeare courses, including Ann Carver, John McNair, Esther Richey, and Dennis Kay. Today, our Shakespeare courses are taught by Andrew Hartley, Kirk Melnikoff, and Jen Munroe as well as by Sonya Brockman, one of our excellent part-time faculty members.

In addition to offering courses on Shakespeare’s plays, several of our faculty members organize university and community events related to Shakespeare. For example, Kirk recently took a group of our students to the American Shakespeare Center in Staunton, Virginia, where they saw Hamlet and Much Ado about Nothing. Much of this work is tied to the the Shakespeare in Action (SIA) Initiative, which Andrew, Kirk and Jen founded and run. Next year SIA will sponsor seven events, including a production of Hamlet.

Our faculty also publish books and articles related to Shakespeare’s plays and give presentations on this topic. Here are just a few recent examples. In 2014 Andrew published Hamlet, a Novel (co-authored with David Hewson). Kirk has just received an invitation to serve as the keynote speaker at the University of South Carolina next year at an event focused on the First Folio. Jen just gave a talk last week titled “King Lear and Environmental Justice.” This talk is related to her forthcoming monograph titled Shakespeare and Ecofeminist Theory (co-authored with Rebecca Laroche).

Although Shakespeare died nearly 400 years ago, his work lives on around the world and right here in our English Department. Happy belated birthday, William Shakespeare. 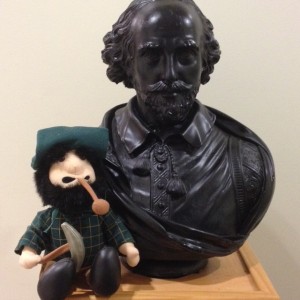 Jessica Morton, one of our graduate students, recently received Outstanding Graduate Teaching Assistant Award offered by the Graduate School. She has been remarkably active in both EGSA and CLGO. She has a chapter titled “Lover, Son, Brother, Batman: The Homosocial Evolution of (the) Robin(s)” forthcoming in a collection of essays.

Lara Vetter’s edition of H.D.’s By Avon River was reviewed in this week’s Time’s Literary Supplement.

April 28 — On Tuesday evening, April 28th, at 6:30 pm here in the foyer of Fretwell, we will host an Exhibition of Work for students with interests in Technical/Professional Writing or Language and Digital Technology. Professional writers and editors from the Charlotte Chapter of the Society for Technical Communication will be joining us to talk with students about their work. All students and faculty are welcome. Light refreshments will be provided.

Quirky Quiz Question — The audio version of Andrew Hartley’s Hamlet, a Novel features the voice of a famous actor. Does anybody know the name of this actor? Earth Day — The 45th celebration of Earth Day will take place on Wednesday, April 22, 2015. In my mind, Earth Day is associated with sustainability, eco-criticism, and nature writing. These topics all relate to the work that takes place in the English Department. I could list many examples, but I will limit

myself to the work of three of our faculty members. This semester, Jen Munroe is teaching two courses that consider issues of “sustainability”–the first a graduate seminar titled “Thinking Green: Ecological Approaches to Texts” and the second a grad/undergrad course on “Shakespeare and Ecofeminism.” In both courses, students wrote a blog post where they considered a current environmental issue with a specific focus on its implications for questions of race, class, and/or gender. Greg Wickliff also teaches courses that relate to environmental issues. Last summer he taught a course in which he had his students write about the natural and historic dimensions of a specific place. Alan Rauch frequently writes about nature and sustainability in his scholarly work. Within the past month he has given two scholarly presentations on the environmental themes in the work of W. H. Hudson, the author of Green Mansions: A Romance of the Tropical Forest (1904). As these examples demonstrate, the English Department honors the values associated with Earth Day all year long.

Lil Brannon recently learned that the UNC Charlotte Writing Project has been awarded $10,000 of federal funds for the second half of the $20,000 two-year award for the site’s 2014-2016 SEED Teacher Leadership Development Grant.

Alan Rauch recently gave a presentation titled “Terra Rima: W. H. Hudson, Environmentalism, and the Collapse of Nature” at the 10th Annual meeting of the British Society for Literature and Science in Liverpool.

Greg Wickliff recently published an article titled “Draper, Darwin, And The Oxford Evolution Debate Of 1860” in Earth Sciences History. He also presented a paper titled “Toward New Imponderables: John William Draper’s Chemistry and Physics Experiments, 1836 – 1842” at the Southern
History of Science and Technology Conference that recently took place at VCU in Richmond.

April 21 — Jen Munroe will give a talk titled “King Lear and Environmental Justice” at 4:30 in Fretwell 290B. Her talk is part of the the Shakespeare in Action’s “36 in 6” initiative.

April 24 — Matthew Rascoff (UNC VP of Learning Technology & Innovation) will be driving in from General Administration on Friday, April 24, to give a talk on UNC’s vision for the future of on-line teaching. The talk will be in the seminar room (290B Fretwell) from 2:00-3:30.

April 26 — The English Department Spring Party will take place on Sunday, April 26, from 5:00-8:00 at the home of Pilar and Tom Blitvich.

April 28 — On Tuesday evening, April 28th, at 6:30 pm here in the foyer of Fretwell, we will host an Exhibition of Work for students with interests in Technical/Professional Writing or Language and Digital Technology. Professional writers and editors from the Charlotte Chapter of the Society for Technical Communication will be joining us to talk with students about their work. All students and faculty are welcome. Light refreshments will be provided. Quirky Quiz Question — The celebration of the first Earth Day took place in 1970. Does anybody know the name of the Senator from Wisconsin who is responsible for making Earth Day an annual event?

Shapiro and Shapiro — As part of the English Department’s involvement in the area of film studies, we are offering a topics course this coming fall semester on Alfred Hitchcock’s films, including The Birds, Psycho, and Thirty-Nine Steps.  The person who is teaching this course is Sam Shapiro, who is a manager at the main branch of the Charlotte Mecklenburg Library.  He is also the long-time film programmer at the public library.  Sam has taught as an adjunct faculty member in the American Studies Program for many years, but this fall he will be teaching for English.

I find it fitting that Sam will be teaching in the English Department, for he is the son of Morton (Marty) Shapiro.  When Charlotte College became the University of North Carolina at Charlotte in 1965, Marty Shapiro was listed as one of the original members of the English Department.  Marty taught in the department until his retirement in 1993.   Today Marty lives in the Memory Care Unit at The Summit at SouthPark .  Although Marty is no longer able to remember much about his years as an English Professor, the fact that his son now has connections to the department helps perpetuate the Shapiro legacy.

Ralf Thiede attended the 82nd SouthEastern Conference on Linguistics (SECOL) in Raleigh this weekend, presenting two papers.  One, with Kristin Brown (a former English major of ours now teaching at Gaston College), was titled “Colonial Shadows: Two Creole Bible Translations” and documented linguistically how a bible can be a colonial power tool or an icon of emancipation.  His other paper, “Your Brain on Story,” explored how the brain’s information management (memory, perception, expectation, association, selection) shares basic features of storytelling.  Ralf was elected vice president of SECOL at the business meeting.

Six graduate students took the M.A. Exams on March 28, and they all passed their exams.  I congratulate all of them.

April 26 — The English Department Spring Party will take place on Sunday, April 26, from 5:00-8:00 at the home of Pilar and Tom Blitvich. Over the history the conference, we have have never agreed on a precise definition of what constitutes a public intellectual, but this hasn’t stopped us from having lively discussions. In fact, I think the inherent vagueness of the term contributes to the liveliness of these discussions. Last year, for example, I made the case for Dr. Seuss being a public intellectual even though the members of the public with whom he shared his ideas were young children. One could argue that preschoolers are too young to understand intellectual discourse. For me at least, such debates contribute to the pleasure of participating in this conference.

As I contemplate the topic of public intellectuals, I am impressed with how many members of our English Department can be seen as public intellectuals. I am aware of numerous examples of members of our department who make an effort to share their work as intellectuals with a broader public. Here are some examples from the past month. Paula Connolly spoke to over 150 people about her book Slavery in American Children’s Literature, 1790-2010 as part of the Personally Speaking series. Ron Lunsford was featured in an article published in the Charlotte Post in which he shared his expertise on the evolution of language. Alan Rauch received a two-year appointment to the Baldwin Library Scholars Council with the expectation that he will help develop programming for the Baldwin Library of Historical Children’s Literature, which is located in Gainesville, Florida. These are just three recent cases of members of our English Department sharing their academic expertise and intellectual insights with the larger public. Such engagement is a hallmark of public intellectuals.

April 8 — Matt Johnson will give a presentation titled “Pressing Matters: The Conservation of Books and their Enduring Legacy” as part of the Julian D. Mason Talks on Rare Books. The event will take place at the Atkins Library’s Halton Room and will begin at 3:30 p.m.

Quirky Quiz Question — In thinking about Melissa Harris-Perry as a public intellectual, I am reminded that she both a professor at Wake Forest University and a host of a weekly television program. Does anybody know the name of the network that airs the Melissa Harris-Perry Show?