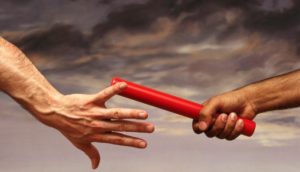 Passing the Baton — In a relay race, one runner passes a baton to another runner, transforming an individual sport into something of a team sport.  Nowadays, the term “passing the baton” also means the transference of responsibility from one person to another, but I think that we should ponder for a moment the racing origins of this phrase.  By handing off the baton from one runner to another, the runners are able to go faster collectively than each runner would go if that runner were running the entire course alone.  At the moment that a runner hands off the baton, the new runner is fresh and ready to add to the record already established by the previous runner.

My appreciation and admiration go to Kirk, Pilar, and Aaron for setting such an impressive pace and for devoting so much energy to the running of the English Department.  My thanks also go to Jen, Lara, and Sarah, who are about to grasp their batons take off running.  They will bring new energy and ideas to their positions.  It’s clear to me the English Department is very much a department on the move.  You will have to look elsewhere if you are looking for the summer doldrums.

Quirky Quiz Question —  In addition to figuring prominently in this Monday Missive, the word baton can be found in other places, including the map of Louisiana.  What is the place name in Louisiana that includes the word baton?

Last week’s answer: The Lost Boy
The title of Paula Eckard’s Thomas Wolfe and Lost Children in Southern Literature alludes to the title of a novella by Wolfe.  Does anybody know the title of this novella? 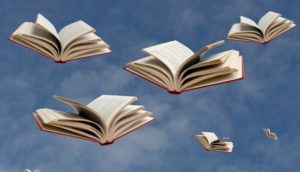 Raining Books — Like a weather forecaster, I try to predict the future. In recent weeks, I have found out about some promising developments related to future publication of books by members of the English Department. Paula Eckard’s Thomas Wolfe and Lost Children in Southern Literature will soon be published by the University of Tennessee Press. Aaron Gwyn has co-edited a collection of short stories by veterans, and Pegasus Books plans to publish the collection in the near future. Janaka Lewis recently learned that her monograph titled Civil Discourse: Black Women’s Narratives of Freedom and Nation has been accepted for publication by McFarland Press. Jen Munroe’s 2011 co-edited collection titled Ecofeminist Approaches to Early Modernity is coming out in a new paperback edition. Lara Vetter’s edition of H.D.’s By Avon River, which came out in hardcover 2014 with the University Press of Florida, will be released in paperback this fall. My forecast for the English Department is that it will soon be raining books, and this is good news.

Home Again, Home Again, Jiggety-Jig — I have just returned home from two children’s literature conferences.  On June 1, I left for Qingdao, China, to participate in the 2016 China-US Symposium for Children’s Literature.  I returned to Charlotte on June 7, and the very next day I flew off to Columbus, Ohio, to attend the Children’s Literature Association Conference.  While there, I received the Anne Devereaux Jordan Award, which is a career-achievement award in the field of children’s literature.

My experiences at these conferences underscored for me how fortunate I am to teach in an English Department that highly values the study of children’s literature.  My career as a children’s literature professor has benefited a great deal from the support I have received from my colleagues and students at UNC Charlotte.

The award plaque I received from the Children’s Literature Association has lots of text, but my favorite line reads, “UNCC is considered one of the centers of study of children’s literature in North America.”  This recognition reflects the scholarship and teaching of many people, not just me.  Our children’s literature program was started by Anita Moss and Sarah Smedman in the 1970s.   Over the years, Paula Connolly, Daniel Shealy, Beth Gargano, and Balaka Basu have played significant roles in building the program.

While I take a tremendous sense of pride and satisfaction in being selected as this year’s winner of the Anne Devereaux Jordan Award, I believe that this award is as much a recognition of the English Department’s children’s literature program as it is my own work in the field.

Boyd Davis represented the Gerontology Society of America at the Taiwan Association of Gerontology in May, in Taipei, where she presented a paper titled “Technology Aids for Older Persons with Impairments.”  Then she went snorkeling with the giant sea turtles at Xiao liu qiu, a coral island in the South China Sea.
Paula Eckard presented a paper at the Thomas Wolfe Conference (the 38th Annual Meeting of the Thomas Wolfe Society) in Asheville in May.  Her paper was titled “Eliza Gant’s Illness Narratives of Loss and Restitution.”  She also participated in a poetry reading of poems about Wolfe recently published in Magic Again, a collection of poems published by the Wolfe Society about Wolfe or inspired by Wolfe by various writers, including Fred Chappell, Robert Morgan, and Pat Conroy.
Beth Gargano published a book review of Empire, Education, and Indigenous Childhoods in the most recent issue of the Children’s Literature Association Quarterly.

Jen Munroe‘s co-edited (with Rebecca Laroche) collection, Ecofeminist Approaches to Early Modernity (Palgrave, 2011) has just been reissued it in paperback.  Here is the link:

http://www.amazon.com/Ecofeminist-Approaches-Modernity-Literatures-Environment/dp/1349296473/ref=mt_paperback?_encoding=UTF8&me=
Alan Rauch presented a paper titled “Anon, a Lady, and Other Rational Dames” at the Children’s Literature Association Conference this past weekend.

Heather Blain Vorhies presented “Painting the Mind: Cognitive Function in Hugh Blair’s Lectures on Rhetoric and Belles Lettres” at the Rhetoric Society of America over Memorial Day weekend. She also hosted a Grand Opening of her Little Free Library this past weekend. Little Free Libraries (littlefreelibrary.org) started in Wisconsin in 2009 with one red schoolhouse library; there are now more than 40,000 internationally. James Vorhies of Atkins Library constructed the bungalow-style library, and Tiffany Morin came along to help out at the Grand Opening.

Last Monday Missive answer: OdenseHans Christian Andersen spent most of his life in Copenhagen, but he was not born in Copenhagen.  Do you know the name of the city in Denmark where Andersen was born and lived until he was fourteen.
Skip to toolbar