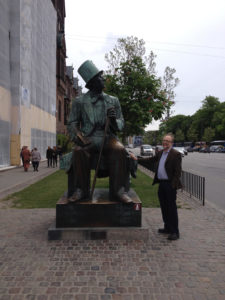 The Land of Hans Christian Andersen — I just returned from a trip to Copenhagen, Denmark, where I researched the connections between Hans Christian Andersen and Tivoli Gardens, Copenhagen’s legendary amusement park.  Before I set foot in Copenhagen, I knew that the city takes pride in its associations with Andersen, but it still came as a surprise to me how central Andersen and his fairy tales are to the culture of the city.

Andersen’s presence is felt throughout Copenhagen.  The famous Little Mermaid statue serves as an icon for the city, but it is only one of many Andersen-related statues scattered throughout Copenhagen.  A larger-than-life statue of Andersen is located on Hans Christian Andersen Boulevard, which borders Tivoli Gardens.  It is sometimes hard to see this statue close up because it is usually surrounded by people who want to have their photograph taken next to this representation of Andersen.  The residents of Copenhagen are also remarkably familiar with Andersen’s fairy tales, and they often make references to these tales in their everyday conversation.

My experiences in Copenhagen underscore for me the role that stories can play in building and maintaining a sense of community.  Copenhagen is a large city with a population of well over a million residents, but nearly all of them feel connected to Andersen and his fairy tales.  His stories are part of the glue that holds the city together.  They readily share their love of his fairy tales with others, so outsiders who are familiar with Andersen’s fairy tales soon feel like they too have a place in this unique city.  The motto for this city is “Wonderful Copenhagen,” and for me and other lovers of Andersen’s fairy tales, the motto rings true.

Stephanie Devine, a recent graduate of our M.A. program, won the NANO Prize for her flash fiction piece titled “Of Felling.”  Here is a link to an interview with her:  http://nanofiction.org/weekly-feature/interviews/2016/05/five-questions-with-2015-nano-prize-winner-stephanie-devine.

Daniel Shealy recently presented a paper titled “‘Allurements of the Flesh’: Louisa May Alcott, Popular Culture and the Education of Youth” at the American Literature Association Conference in San Francisco.Quirky Quiz Question —  Hans Christian Andersen spent most of his life in Copenhagen, but he was not born in Copenhagen.  Do you know the name of the city in Denmark where Andersen was born and lived until he was fourteen.

Last week’s answer: Geometry
Madeleine L’Engle did not invent the term “tesseract.”  She borrowed the term from a field of study that can be traced back to a Greek scholar from Alexandria.  What is this field of study? 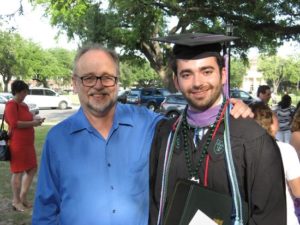 Parallel Universes — Until this week, for the entire time that I have served as the Chair of the English Department our son, Gavin West, has been a college student at Tulane University.  Over the years, I have sometimes felt as if I’ve been traveling back and forth between parallel universes.  When I am in one universe, I see the work of universities from the perspectives of faculty members and university administrators.  When I am in the other universe, I see this work from the perspectives of students and parents.

Over the course of this past weekend, I periodically remembered that on the same day that our son was walking across a stage while his name was being called out, many of our department’s students were also walking across a stage to the sound of their names being announced.  At the same time that he was taking satisfaction in completing his degree in architecture, many of our students were experiencing a similar sense of satisfaction in completing their English degrees.  While my wife and I were practically bursting with pride at Gavin’s accomplishments, I am sure that the parents of our graduating students were beaming with pride at their students’ accomplishments.

In Madeleine L’Engle’s A Wrinkle in Time, the central characters use something called a “tesseract” to jump through space and time, and each time they make these jumps it changes their perspectives.  This past weekend, I had my own private tesseract that ping-ponged me back and forth between New Orleans and Charlotte, and it helped change my perspective on the hoopla surrounding commencement ceremonies.  As most of my friends and family members know, I feel uneasy wearing regalia, and I don’t usually respond positively to pomp and circumstance,.  However, my very recent experience at Tulane changed my perspective a bit.  Although participating in commencement ceremonies is still not my favorite activity, I now better appreciate the pleasure that many students and parents associate with such ceremonies.

Jen Munroe gave an invited paper titled “Teaching Recipes in the Digital Age” on bringing together manuscript transcription and digital humanities work in the classroom, at the Manuscripts Cookbook Conference at NYU, May 11-13, 2016.

Quirky Quiz Question —  Madeleine L’Engle did not invent the term “tesseract.”  She borrowed the term from a field of study that can be traced back to a Greek scholar from Alexandria.  What is this field of study?

Andrew Hartley’s new collaborator, Tom DeLonge, became famous when his band, Blink-182, released their debut album in 1995.  The title of this album comes from the name of a fading feline from British children’s literature.  Can you guess the title of Blink-182’s debut album? 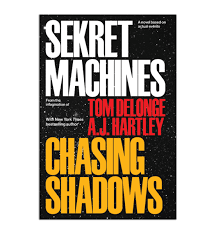 Collaborations — Many members of our English Department work collaboratively with other writers and scholars, but as far as I know, only Andrew Hartley has entered into a collaboration with a rock star. Andrew and Tom DeLonge (the lead singer of Blink-182 and the founder of the new rock band Angels and Airwaves) have just published their co-authored thriller novel titled Sekret Machines: Chasing Shadows. This novel, which is intended to be the first in a series, has already received a number of very positive reviews.

Andrew’s latest collaboration prompted me to think of other English professors who engage in collaborative work. A number of our professors have regular research and writing collaborators. Here are three examples that immediately come to mind. Jen Munroe often collaborates with Rebecca Laroche and Lynne Bruckner on scholarly projects related to ecocriticism and ecofeminist theory. JuliAnna Avila often collaborates with Jessica Zacher Pandya on research related to digital literacy. Boyd Davis has a long list of collaborators, but recently she has worked on numerous gerontology-related projects with Dena Shenk, the former Director of UNC Charlotte’s Gerontology Program.

Several of our faculty members collaborate with other faculty on teaching-related projects. Kirk Melnikoff, for example, has team-taught several sections of a Prospect-for-Success with Kent Brintnall from the Department of Religious Studies. Their course is titled “Sexing Shakespeare,” and it is tied to the General Education Program. In their course, they apply contemporary theories of gender and sexuality to Shakespeare’s plays. Ralf Thiede and Dan Boisvert from the Department of Philosophy are also co-teaching a Prospect-for Success course. Their course introduces students to the evolution of human language as well as the impact of language on the evolution of humans. Allison Hutchcraft and our visiting creative writer, Michelle Cahill, worked closely together in developing Michell’s advanced creative writing course. While they did not co-teach the course, they fully collaborated in the preparation of the course.

I could list many more examples of faculty members from English who regularly engage in collaborative writing, research and teaching projects, but the above mentioned examples demonstrate that our department is not a collection of isolated professors working in the solitude of their offices. While most of us do collaborate with rock stars, the department as a whole rocks when it comes to collaborative projects and mutual support.

Sarah Davis, one of our graduate students, has accepted her offer (with full funding) to become part of the PhD program in English at SUNY Stony Brook in the fall.

May 14 — The CLAS Commencement Ceremony will take place on Saturday, May 14, at 10:00 AM in the Student Activity Center.

Quirky Quiz Question — Andrew Hartley’s new collaborator, Tom DeLonge, became famous when his band, Blink-182, released their debut album in 1995. The title of this album comes from the name of a fading feline from British children’s literature. Can you guess the title of Blink-182’s debut album?

In addition to teaching creative writing courses, Allison Hutchcraft is a publishing poet.  She has published a number of poems that make reference to a particular type of bird that was once common in America.  Do you know what type of birds do so often show up in Allison’s poems? 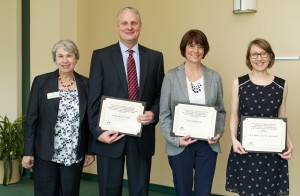 Our creative writing program benefits tremendously from the contributions of our part-time faculty members.  In addition to Allison, these part-time faculty members include Paula Martinac, Coleen Muir, and Lance Phillips.  Not only do they teach a variety of creative writing courses, but they have also helped organize poetry readings and other events open to our students and faculty.

Bryn Chancellor recently gave a fiction reading and craft talk at Vanderbilt University as part of the Harold and Gertrude Vanderbilt Visiting Writers Series.
Heather Vorhies recently learned that her article titled “Women and Corporate Communication in the Early American Republic” has been accepted for publication in Peitho Journal.

Upcoming Events and Deadlines— Here is an important date to keep in mind:May 4  —  The English Department’s Student Awards Ceremony will take place on Wednesday, May 4, from 12:30–2:00 in the Halton Reading Room at Atkins Library.

Quirky Quiz Question —  In addition to teaching creative writing courses, Allison Hutchcraft is a publishing poet.  She has published a number of poems that make reference to a particular type of bird that was once common in America.  Do you know what type of birds do so often show up in Allison’s poems?

At the English Department spring party, both Lil Brannon and Connie Rothwell were honored as they complete their last semester before retiring.  After I presented them with their retirement gifts, they both talked about their experiences in the department.  Both of them mentioned a retired colleague who now lives in McClellanville, SC, and writes poetry.  What is the name of this retired English professor?