Fandom — My wife and son are long-time Star Wars fans, so the debut of the new Star Wars movie was a big deal in our family.  We went to a10:45 pm screening of the movie on the very first night it opened.  We arrived at the movie theater more than an hour early so that we could get good seats.  Initially, I was reluctant to stand in line for so long, but I actually enjoyed the experience.  We spent much of the time talking with other people waiting in line.  We ran into a former colleague from the university who ended up sitting with with us during the movie.  We listened to a brass band stationed outside the theater.  The band members were dressed up as Star Wars characters, and they enthusiastically played various Star Wars tunes.  What I enjoyed the most, however, was witnessing the high level of excitement among the hundreds of fans eagerly waiting to see the movie.

For some reason, the unbridled enthusiasm of fans appeals to me.  I like their passion for stories, their willingness to immerse themselves in the details of plots and characters’ backstories, and their desire to create a sense of community with other fans.  In many ways, fans have much in common with those of us who write literary or film criticism or who teach courses on literature and film.  As academics, we tend to be a bit more restrained in our responses to stories, but I suspect that beneath the surface of many a literary critic there is a fan waiting to awaken.

As every fans knows, there are pleasures that come with sharing stories and participating in communities.  These are among the pleasures that I hope all of you are able to enjoy during our much-deserved winter break.  May the force be with you.

Kudos— As you know, I like to use my Monday Missives to share news about recent accomplishments by members of our department.  Here is the latest news:
Boyd Davis recently learned that her VA Promising Practice Project (Training Community Clergy Partners to Improve Access to Care for Rural Veterans) has just been funded. Her partners include the National Guard and several denominations that are highly popular in the rural South. She’ll be analyzing recordings of initial training sessions and preliminary interactions with Veterans to suggest improvements to the training interaction.   She also learned that her co-author chapter titled “Sociolinguistics of Aging and Language” will appear in the forthcoming book Cognition, Language and Aging.

Lance Phillips recently learned that two short poems of his have been accepted by the print journal Fence, and a longer poem will be included in the new edition of the online journal Apartment.

Quirky Quiz Question — When George Lucas wrote the screenplay for the original Star Wars movie, he was strongly influenced by a book titledA Hero with a Thousand Faces. What is the name of the author of this book?

Biltmore Estate has long had a nickname among the residents of Asheville.  This nickname includes the word “Hill” but it has nothing to do with Senior Associate Dean Bill Hill (although Dr. Hill received his undergraduate degree from nearby Appalachian State University).  What is the nickname for Biltmore Estate? 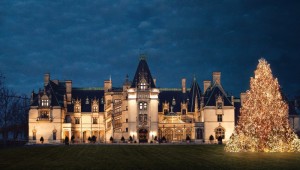 Connections — This past week my wife and I paid a quick visit to the Biltmore Estate in Asheville in order to see the famous mansion all decked out for the holidays. As we toured the home, I kept thinking about all the differences between the world that the Vanderbilts inhabited and the world that I inhabit. I began to wonder if there are any connections that tie the Vanderbilts to the English Department. At first I thought there were none, but after I gave the matter some thought, I came up with three.

George Vanderbilt, the man who orchestrated the building of Biltmore Estate, and Thomas Wolfe, the famous author, both lived in Asheville during the early part of the 20th century. Wolfe was born in Asheville in 1900, five years after the grand opening of Biltmore Estate. Wolfe was well aware of the Vanderbilts during his growing-up years, and he incorporated the Vanderbilts in his autobiographical novel, Look Homeward, Angel. In his novel, however, he called the Vanderbilts the Goulderbilts, and he changed the name of Biltmore to Biltburn. One of the nation’s leading experts on Look Homeward, Angel teaches in our English Department. She is the Editor of the Thomas Wolfe Review, and her name is Paula Eckard.

George Vanderbilt cared as much about the land surrounding his home as he did about the building itself. For this reason, he hired Frederick Law Olmsted, America’s foremost landscape architect at the time, to take charge of the landscaping associated with this project. Olmsted’s role
in the history of landscape architecture is of interest to many contemporary historians, including Joyce Connolly, who is currently a Museum Specialist at the Smithsonian Gardens in DC. Before joining the Smithsonian, Joyce Connolly worked at the Frederick Law Olmsted National Historic Site in Massachusetts. Joyce Connolly is the sister of Paula Connolly.

Boyd Davis has just returned from Belgium, where she delivered a plenary address titled “Thirteen Ways of Looking at a Corpus: The Carolinas Conversations Collection” at the CLARe Workshop on Language and Aging. For more information about this address, please click on the following link:
http://dailyscience.be/2015/12/10/quatre-axes-de-recherche-pour-mieux-vieillir/

Chris Davis recently learned that the journal December just accepted two of his poems. these poems are titled “Graphic Material” and “Shell Island.”

December 19 — The Commencement for the College of Liberal Arts and Sciences will take place in the Barnhardt Student Activity Center (SAC) on Saturday December 19th at 3:00 pm.

December 21 — Final grades for the Fall 2015 term must be submitted by Monday, December 21 at noon.

Quirky Quiz Question — Biltmore Estate has long had a nickname among the residents of Asheville. This nickname includes the word “Hill” but it has nothing to do with Senior Associate Dean Bill Hill (although Dr. Hill received his undergraduate degree from nearby Appalachian State University). What is the nickname for Biltmore Estate?

Bing Crosby’s recording of “White Christmas” holds the record for being the best-selling single of all time, but many other singers have also recorded this song. In 1944 another famous crooner released a version of the song that also was a hit on Billboard magazine’s singles chart. This crooner’s 100th birthday falls on December 12 of this year. What is the name of this famous singer?

Holiday Season — The derivation of the word holiday can be traced back to the Old English word for holy day. Although the word holiday is no longer used exclusively for days that have religious significance, the word still has religious connotations. For this reason, I associate the start of the holiday season with Hanukkah. This year Hanukkah began at sunset on December 6, and will close on Monday, December 14. If any of you are interested in learning more about the history of Hanukkah, I recommend that you read a recent blog post written by my friend and colleague James Tabor. Here is the link: http://jamestabor.com/2015/12/05/hanukkah-yes-but-what-about-kislev-24-2/

In our religiously diverse country, we are often unsure how to celebrate or commemorate the religious holidays associated with religions that are not our own. For many American Jews, the holiday of Christmas is an especially tricky issue. During my childhood, this issue arose every December. My mother came from a Christian background and enjoyed celebrating Christmas, while my father came from a Jewish background and never felt entirely comfortable with my mother’s Christmas doings. Still, my father made his peace with Christmas by contributing to our own family traditions during the holiday season. For my father, the high point of the Christmas season was reading Charles Dickens’s A Christmas Carol aloud to our entire family. I wrote about this aspect of my family history in a column that ran in Charlotte Viewpoint a few years ago. Here is the link: http://www.charlotteviewpoint.org/article/2922/’A-Christmas-Carol’-bridges-family-traditions

Irving Berlin, another American Jew, also made his peace with Christmas. In fact, he wrote “White Christmas,” which is one of the most famous Christmas songs ever recorded. Berlin’s “White Christmas” debuted in the the 1942 film Holiday Inn, starring Bing Crosby and Fred Astaire. As a Jew, Berlin found that writing this song was a bit of a challenge, but he overcame this challenge by celebrating the aspects of Christmas that transcend particular religious teachings or themes.

As we look forward to the English Department’s holiday party on Thursday, I think we too can celebrate the holidays while respecting our religiously diverse community. I like to think that there is plenty of room for all of us at our own Holiday Inn.

Allison Hutchcraft has been awarded a Regional Artist Project Grant from Charlotte’s Arts & Science Council in conjunction with the North Carolina Arts Council to work on her book manuscript.

Sarah Minslow published a review of Genocide in Contemporary Children’s and Young Adult Literature in the most recent issue of the Children’s Literature Association Quarterly.

Maya Socolovsky published an article titled “Cultural (Il)literacy: Narrative of Epistolary Resistance and Transnational Citizenship in Julia Alvarez’s Return to Sender” in the most recent issue of the Children’s Literature Association Quarterly.

December 10 — The English Department holiday party will take place on December 10, 2015, from 11:30-1:30 in the faculty/staff lounge. As usual, this will be a potluck event. There is a potluck sign up sheet at the front desk.

Quirky Quiz Question — Bing Crosby’s recording of “White Christmas” holds the record for being the best-selling single of all time, but many other singers have also recorded this song. In 1944 another famous crooner released a version of the song that also was a hit on Billboard magazine’s singles chart. This crooner’s 100th birthday falls on December 12 of this year. What is the name of this famous singer?

Pilar Blitvich just returned from Valencia, Spain, which is sometimes called the Orchard of Spain. Valencia is especially famous for what type of fruit?